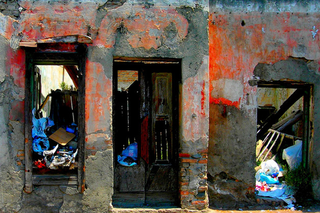 Radical Animal is a "book-net" - a book-text that will emerge from my own researches, and others' participation in this: and once it appears, it will stay in dialogue and in evolution with those networks. To that end, I'll be posting some extracts from my main writing on this Ning site - and inviting response and dissemination from you all.

This is a slice from Chapter 1, titled Nudge, Steer, Stumble, Dance: the intellectual battle for human nature. Very interested in what you have to say.

From chapter 1 of Radical Animal: innovation, sustainabiilty and human nature, by Pat Kane

WE ARE in the midst of a gathering consensus about human nature, drawn from many different social and natural sciences, and even promising a new space of fusion between them. Some of this consensus rests on the refutation of a selfish or individualist model of human agency, in which a particular reading of Darwinism became entangled with the rise of capitalist economic relations, and the figure of "economic man" strides forth everywhere in modern life.

The alternative reasserts the "social animal" in  economic man's place. Audiences in the developed West, moving through their retail-plastered and car-clogged cities and suburbs, are being asked to accept that their experiences of being "free consumers" are illusory. This goes deeper than any environmental critique about heedless consumption of material resources . The illusion is, in some accounts, that of individual agency itself.  We are creatures much more determined in our volition by our evolved need to belong with, and gain status among others, than we can easily admit. We are predictably irrational in our short-term, greedy responses to long-term and difficult challenges - and thus we are "herds" to be "nudged" this way and that by enlightened legislators and marketers, who accept the research on how limited the rationality of the modern citizen-consumer-worker actually is, and are "bold" enough to act on it.

What is fascinating about the rise of this new intellectual template for the "social animal" is the way it commonly appears in the discourse of what would seem quite separate bids for social power. For example, the role of evolutionary explanations in British political policy over the last 15 years, covering both Blair's New Labour and Cameron's New Tories, has mostly been in the context of social pathology. How can welfare cheating and a corroded work ethic, civic apathy and poor diet, be explained and mitigated? Rather than the answers being found more systemically - say, the contradictions and alienations of capitalist society - the source of the problem has often been identified much deeper in human nature, and much further back in the human record. Our hunter-gatherer, savannah-era instincts and capacities make us short-circuit and self-destruct, amid the overwhelming temptations and seductions of modern society.

The rise of "happiness" and "wellbeing" politics across all political parties is rooted in this evolutionary-psychological vision. In societies where we are "in over our heads", incapable of mastering the social complexity that we have, nevertheless, somehow generated, the solution is to become aware of those deep impulses which truly gratify us. We should concentrate on relations of partnership, friendship and family; on finding causes that we can believe in, that transcend our own petty anxieties. The similarity between what Anthony Giddens once called "philosophic conservativism", and the outlines of a social contract in apparent harmony with our deep evolved nature, is obvious.

Yet doesn't this "social animal" imply the kind of steady, enriching commitment to others and traditions that the rip-it-up-and-start-again dynamic of consumer capitalism is dedicated to unsettling? How can economic growth based on an intense marketing push towards a zillion unsatisfiable and niche desires be remotely commensurate with this humble, somewhat bumbling member of the human herd?

This is where the sciences of the new naturally-social human becomes a useful tool for radical environmental thinkers, who find themselves in a strange alliance with the most conventional of political regimes. For different reasons, both greens and business-as-usual centrists are looking to answer the question of how to make do with less. For the latter, the expenditure crisis of healthcare, education or pensions - rising demand in each area, putting pressure on tax revenues from productive areas of the economy - pushes them in every direction to look for tools that can bring "behaviour change". For greens, the material crisis of planetary limits - caused by that very same hyper-production/hyper-consumption model - requires an equally frantic search for an new understanding of human appetites, in order to bound and constrain their flourishing. As the brilliant economic commentator William Davies explains, politics-as-usual will have more to lose from embracing this new, pro-social model of human nature than the greens: already its leading advocates - like Richard Layard on the centre-left, or Jesse Norman on the centre-right - are recommending constraints on advertising, or certain kinds of corporate economic development.

And for greens, the prize of the social animal is that their vision of a different kind of "prosperity without [economic] growth" gains intellectual credibility across the mainstream of society. Many green thinkers are beginning to see a dream alignment - between the need to argue for a society of "limits" to consumption and production, to prevent further destructive warming of a carbon-choked world; and the growing general presumption that there are evolved "limits" to human nature which it would be wise to acknowledge (and to allow our political classes to legislate for). Asceticism and minimalism are to be found in the pathways of the brain, themselves inexorably grooved into shape by evolution.

Yet does something seem all too convenient about these consiliences? As we raise our heads from this page, and cast our eyes about us at the riot of form and invention (as well as unnecessary duplication) that populates the average high-street, does this new, recognisably Puritan human nature really ring true? The more intelligent green thinkers recognise that they have to address the "novelty" question in the human animal: that other pathway of our species' history which disrupts, transforms and de-natures our immediate surroundings, using language and technology and other extensions of the mind.

In Prosperity Without Growth, the influential Tim Jackson argues that we need to think of "bounded capabilities" - our right to flourish and live well, but within certain clearly defined limits, set by our ecosystem demands and population pressures.

And some of that boundedness is particularly intimate. Jackson quotes the Oxford economist Avner Offer on the importance of "commitment devices" - institutions like marriage, religion, credible government, where we consciously "curtail our appetite for immediate arousal to protect our own future interests".

Marek Kohn writes about the importance of democratic action in changing our behaviour in a carbon-light direction - but the importance comes from how activism answers our evolved desire for status-recognition in small-groups, its ability to exploit our needs for belonging that are not entirely within our control. Kohn suggests that a little "fiendish cleverness and some good branding" might be able to exploit this susceptibility to sociability - a strange admission, in the course of an argument about the importance of citizen involvement in green futures, compared to the mild authoritarianism and despair of democracy voiced by figures like James Lovelock.

So the desiring machines of contemporary advertising may have their uses, after all? Or to put it another way: might the kind of symbolic display and technological invention that crowds our experience in Western modernity not simply be a "false need" incited by "fiendishly clever branders", but an answer to a need for novelty, beauty, functionality and ingenuity that is perhaps just as deeply rooted as our herdable, sociable natures?

Environmental politics might find much succour in the new consensuses of human nature that proceed from the "behaviourising" of economics over the last 20-odd years. But this understanding is surely not sufficient to address the whole human creature. We are a radical animal, as well as a social animal - able to go to the roots of any phenomenon, including ourselves, and pull up knowledge and insight that hasn't quite existed in that particular way before. As the climate statistics pile up ever higher and more incontrovertibly, we require a fuller and richer picture of our human nature than pendulum-swings between an "individualist" or (to coin a phrase) "socialist" characterisation - the better to guide our collective appeals to a different way of living.

There is, of course, a human faculty whose very purpose - indeed, its core evolutionary purpose - is to stage and encompass these very diverse fluctuations of our being. The radical animal is the human at play, and in play. And if we want to find an authentic connection to the natural world of which we are now the (perhaps reluctant) stewards and gardeners, we could do worse that explore the common playground between our species and others.